What’s next? Gear Acquisition Syndrome or get some toys. Yay!

When I started thinking about the idea of going analog, my old Mamiya ZE was the first camera that came to my mind. Unfortunately, with a preset aperture priority and without the ability to go fully manual. Furthermore, when I took it out of its bag to inspect it, I found some dissolving seals and sticky old synthetic leather. 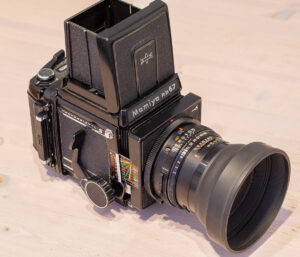 ago, from a colleague. A great toy and I enjoy playing around with this camera a lot. But it is heavy, big and bulky. Really heavy, big and bulky. And the lens, a Maniya Sekor 80mm f/3.5, which not only controls the aperture but also the shutter openening and speed has a marginal problem. The times are running quite accurate but unfortunately not when I press the shutter but after some unpredictable time. Not that easily to operate. I will have the lens repaired in a little while but this combination is for sure unusable for my approach. And did I mention that it is heavy, big and bulky?

Third try was to go with a Canon 7, an old Canon rangefinder camera with a build in selenium photometer and the Leica M39 screw mount. Used M39 compatible lenses, even originals by Leica, are relatively cheap to get. But there is still this thing with the selenium light meter. Some deeper research brought up, that finding a model with a working photometer is at least extremely time consuming while not nearly impossible.

What else… Having already thought about some used Leica lenses…
Why not have a look at the used camera market and get a Leica rangefinder. Maybe a Leica M3, , or M4, or M4-2, or M5, or M4-P, or sh*t, I’m lost. I never really was informed about the historical lineup of Leica. Fortunately I received some very appreciated consulting from my fellow photographer Dirk Möller (don’t miss his portfolio on http://www.dirkmoeller-fotografie.com) who pointed me to the Leica M6 and to the offers of used gear at Photohaus Collonaden. 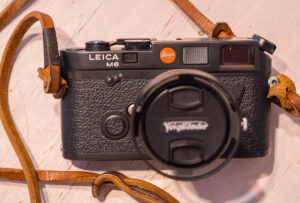 after turning over some registers with Leica serial numbers, helpful guidance from the Photohaus staff and having the the different bodies visually checked, I finally chose a M6 built in 1995 which made the best  mechanically impression and looked very clean. And, Woohoo, I got a very special edition “Leica Partner-Aktion Deutschland 1996”, Yeehaw…
Furthermore, Photohaus gave me the chance to test the body in the wild for some weeks and, in case of mechanical defects, to change it.

At least the body has to be completed with a lens. You remember this one 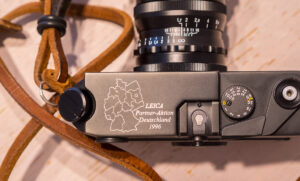 camera, one prime lens thing? After some research and after being paralyzed by the prizes charged for original Leica glass, I decided against it and got a Voigtländer 35mm f/1.7 Ultron. And I got a 90mm f/2.8 Elmarit (…from Leica…), just because I was able to make a snip on ebay. And because I would like to have a portrait lens. I know… This one camera, one lens thing… Unpacking that lens, built in 1964, and turning this still unbelievable smooth focus ring for the first time was quite impressive.

Now it is about to get some light on some straps of film and making sure that everything is working fine.

Where this experiment starts