Get some more gear and go self-developing… It took me some time to send the exposed films out to MeinFilmLab for developing and therefore I’m still waiting to get the negatives back and I’m still curious about the results. Waiting is kind of boring and when I get bored I tend to get twitchy and I end up getting  some gear for black and white film developing. 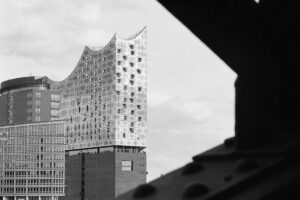 First thing was to print out from the internet to get some guidance and read a suitable book. I found “Absolut analog” by Monika Andrae and Chris Marquardt at the local book store, which was really a great reading to start – complete, on the point and helpful, at least for me.

On Jobo.com a proper starter kit was available, on Amazon some chemicals (Ilfosol 3 developer and Ilford Rapid Fixer) as well as a changing bag. 5L of demineralized water were waiting at the hardware store and, in order to practice the film handling in the changing bag prior to crack the first real film, I got some cheap Agfa color straps from a local dealer.

Next thing was to sidle around Hamburgs new Elbphilharmonie and get two films ready for development while waiting for the Jobo-kit to be delivered. I had an Ilford Delta 400 available, so that will be the next film to splash around with and, very deep down somewhere in my cases and boxes, I found an Ilford FP4 that has probably expired in 1985. That was the one to start with today.

Winding up the film onto the development coil, all inside of the changing bag without any sight on what I did, was quite challenging but, due to some training with the Agfa films, it worked out somehow. The remaining steps where quite easy, thanks to the good preparation by hints and guidance found on the interwebs and in the book mentioned above.

Due to the age of the expired FP4 and its probably decreased sensitivity, the normal speed was ISO125, I exposed it like an ISO80 film and decided to go with a development recipe (Ilford FP4+, Ilford Ilfosol 3) for ISO100, knowing that I could not expect too much from this experimental approach. It’s just a test and the next film will be developed a little bit more earnestly. Massive Dev Chart was very helpful in getting the recipe, temperatures and times. I chose a dilution of 1+14 for the developer, because it gave me 3 more minutes of process time for my first approach, instead of hurrying the process with a stronger 1+9 dilution.

So, after some watering, developing, fixing, another refreshing bath and a night of hanging in my bathroom in order to get dry, here are some freshly scanned results of my first self-developed strap of film.

All pictures are shown as they were scanned, no further spotting or exposure adjustments. I’d just decreased the size and let Lightroom add some moderate sharpening during the JPG export. Guess I have to face a challenge with the drying process. There are a lot of water streaks and stains, even if I’d watered the negatives in demineralized water for about ten minutes. I’m positively surprised by the exposure and the look.

Feel free to comment and I’m thankful for hints and guidance regarding your experience regarding negative drying.

Where this experiment starts