The day started with some really fine weather. Bright sun, light eastern wind and about 17°C. One of the remaining tracks on my wish list starts at La Cumbrecita, a deep trench in the southern caldera border, but still 1312m high. The access to La Cumbrecita is limited, so I decided to leave the car at the Visitors Center  above El Paso and take a Taxi (8€) for the last kilometers. The chosen track is a bit “challenging”. Overall 400m uphill, 1300m downhill and with some tricky section where the track is secured by chains and steel cable or steel steps mounted to the steep face. Therefore the track description in tracking guide says: “Ask for the conditions.” I’ll asked and together with the ranger the following conclusions where made: 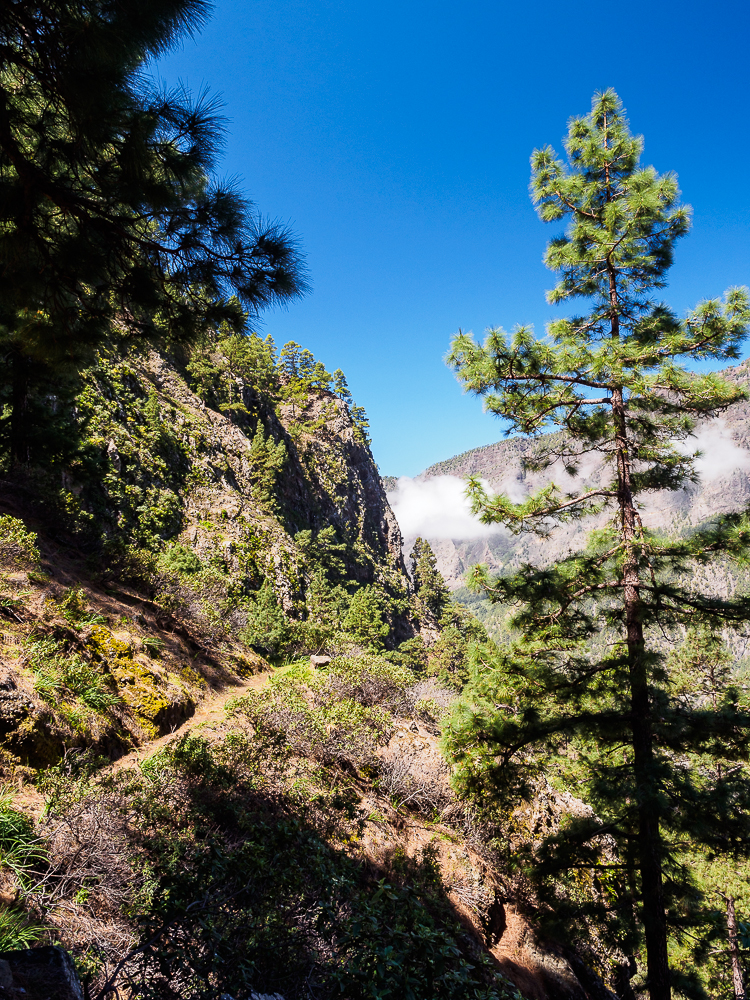 Short after La Cumbrecita the path dives deeply into the Barrancos and leads one on narrow tracks through old Canary Pines, which cling to the steep slopes. The track remains narrow, sometimes rampant but most of the time abruptly descending, always slippery by bare rock, gravel or pine needles. After approximately 2/3 of the track, the fun began. Gravel slides had filled up the track and extreme caution had to be taken. Passed this, the next challenge appeared. In order to climb down to the next Barranco ground, two options where offered. One on the upper side, secured by chains and easier to climb but… unfortunately completely destroyed by rock slides. So let’s try the other way, crossing a blank steep cliff on steely steps down to the ground of the canyon. One or two of those steps where bent by some heavy rocks and fairly useless. Makes the climbing even more interesting 😉 Crossing the canyon ground to get to the exit was the next thrill. 45° steep loose gravel, two meters above a 12m high rock step… ok done with that, now get to the exit. Exit? Gone. 3m to climb on wet naked rock to get to the former exit. On the next 500m of the path there where again some gravel slides, more or less routine if you made it up here ;). Climbing trough the last challenge, the next canyon without save entrance and exit but with gravel, loose rocks and some water and the hard part of the track was done.

The rest of the tracks leads trough sparse pine woods, later almond trees and succulents, always steep and gravelish down to the Mirador de la Cancelita. Made my call to the Visitors Center and went down the hill to Los Llanos. The last part of the track starts a bit boring on a gravel road, but later on it passes nice residential houses above the city of Los Llanos. Found a taxi and after 6h I was back at the Visitor Center. As promised, I gave them a short report about the conditions on the track and when I showed some of the pictures I’d made, one’s brow furrowed. I Suspect the track will be closed until one of the rangers had patrolled it and considered it to be safe.

Sorry, too many pictures… But there were so many overwhelming impressions and the whole track leads through such a great scenery with fantastic views inside the Caldera de Taburiente and to the surrounding mountains… Before it gets boring just play “Guess the right path” on picture °20 to °27 😉